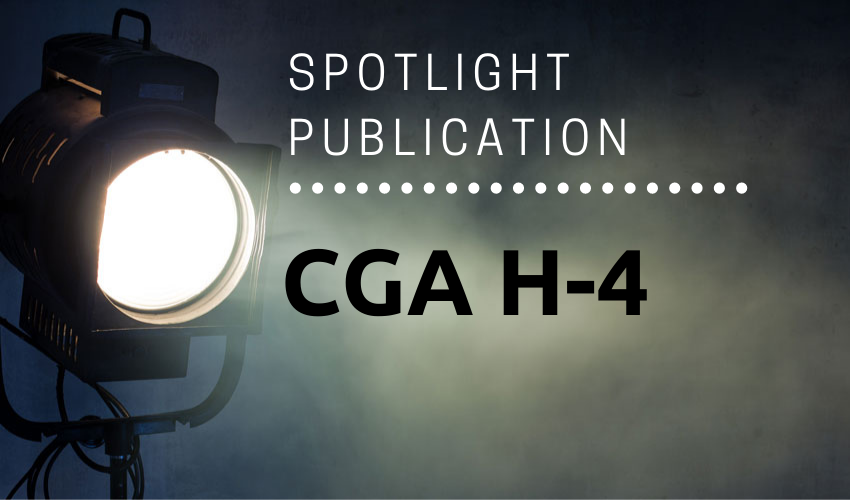 The use of hydrogen has been expanding, particularly for fuel cell electric vehicles (FCEVs). The growing use of hydrogen means that terms that were previously found only in specialized fields are now becoming part of the mainstream vernacular. Other terms may have developed meanings that differ from those used in ordinary, non-hydrogen applications.

In April 2020, the Compressed Gas Association (CGA) released the 3rd edition of CGA H-4, Terminology Associated with Hydrogen Fuel Technologies. This safety publication covers technologies and terminology that applies to hydrogen fuel production, storage, transport, and use, and provides a single source of uniform terminology for hydrogen fuel technologies. This publication will be useful to those involved with the production, storage, transport, and use of hydrogen, as well as regulators, and codes and standards developers.

The technology descriptions section of CGA H-4 provides an overview of the ways in which hydrogen is produced, stored, transported, and used.

Once hydrogen has been produced and purified, it then must be transported to customer (user) sites where it will be stored before being used. There are five techniques described in CGA H-4:

We provide details about each technique below.

Transporting and storing hydrogen in gaseous form is one of the simplest methods. However, gas hydrogen must be compressed to high pressures, as much as 15,000 psi, to have usable amounts of hydrogen storage. Hydrogen’s light weight means that the majority of the weight is found in the storage or transportation container, rather than in the stored hydrogen itself.

The four typical methods of transporting and storing gaseous hydrogen are listed below:

Liquid hydrogen is transported in specially designed trailers and railcars, then stored in liquid tanks.

The nature of liquid hydrogen (and other cryogenic fluids) makes for a bit of a challenge deciding to what percentage of its capacity to fill a storage container. An empty space called “ullage” provides room for liquid expansion to avoid overfilling the container, operating the pressure relief devices, and venting hydrogen. Appendix A gives a detailed description of the variables that affect the optimum sizing of the ullage space. Too small an ullage space can lead to hydrogen venting, while too large an ullage space leads to wasted space where hydrogen could have been stored.

Hydrogen can also be stored via these methods:

Although hydrogen has many uses, CGA H-4 focuses on hydrogen use in fuels cells and combustion, as described below:

CGA H-4 contains a schematic of a PEM fuel cell.

Hydrogen can also be used as the fuel in an internal combustion engine (ICE) either as a pure gas or mixed with natural gas (or other hydrocarbon fuels):

The second part of CGA H-4 consists of a glossary of 118 terms, commonly used for hydrogen. This glossary provides an essential reference tool for those needing an understanding of hydrogen production, transportation, storage, and use terminology. The glossary supplements the information in the technology section.

Members of the Compressed Gas Association have long been global leaders in the production, storage, distribution, and application of hydrogen and other industrial gases.

In addition to our existing library of hydrogen standards, we are bringing our unique expertise in hydrogen to the development of new standards for emerging applications in the hydrogen-powered transportation space.

A complete list of CGA’s hydrogen-related safety standards, as well as details about our Hydrogen Initiative, may be viewed here.