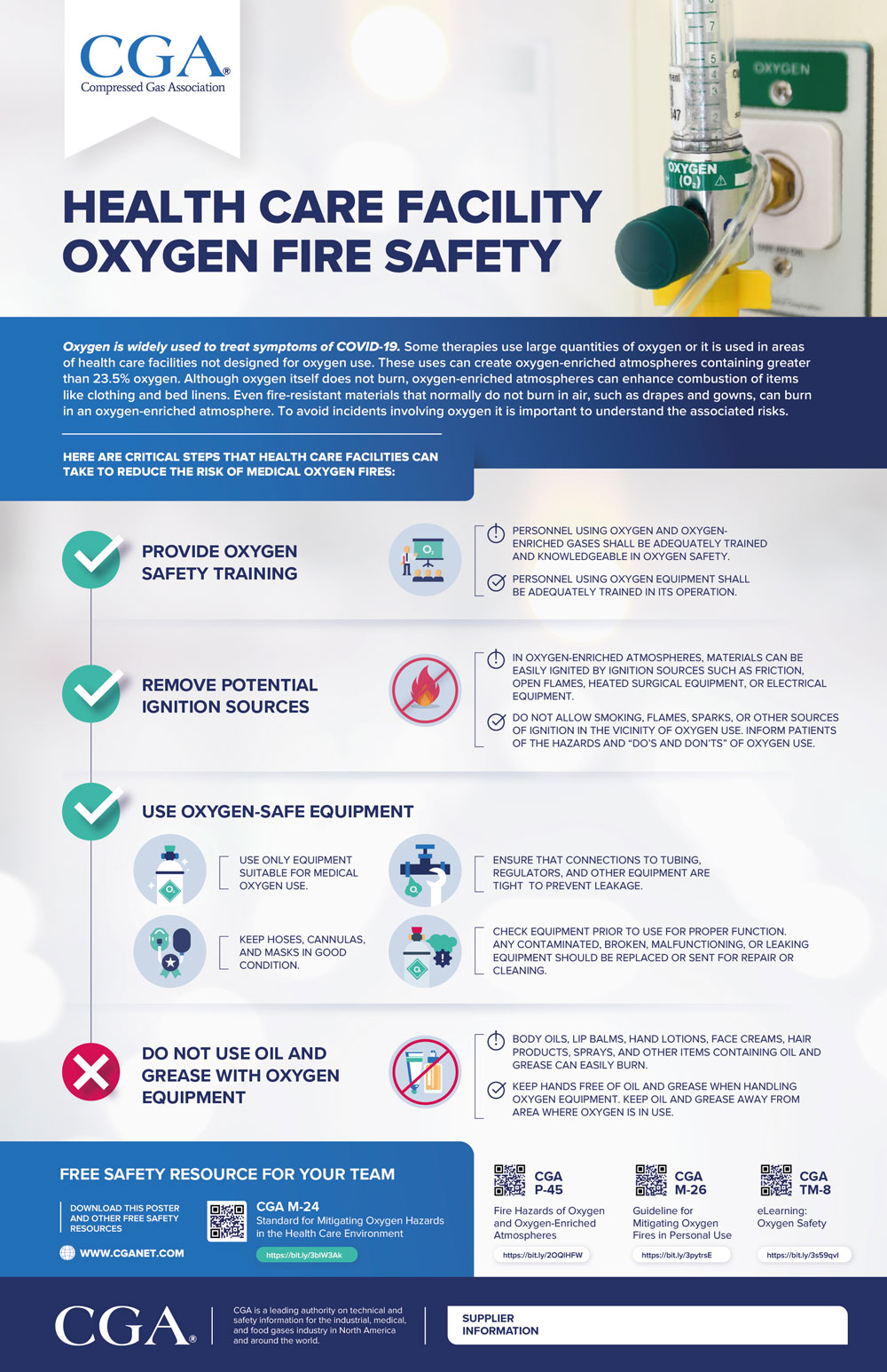 Medical oxygen plays an essential role in delivering patient care during the COVID-19 pandemic. Some therapies require large quantities of oxygen or its use in areas of health care facilities not designed for oxygen use, which can create oxygen-enriched atmospheres containing greater than 23.5% oxygen.

Although oxygen itself does not burn, in oxygen-enriched atmospheres, materials can be easily ignited by ignition sources such as friction, open flames, heated surgical equipment, or electrical equipment. To avoid incidents involving oxygen and oxygen-enriched atmospheres, it is important that health care personnel handling and using these gases and associated equipment understand the associated risks and mitigation practices.

This poster, provided by the Compressed Gas Association, provides basic safety information for health care environments where medical oxygen is in use. It includes critical steps that health care facilities can take to reduce the risk of medical oxygen fires. To learn more about oxygen, see the section, “Product Information: Oxygen” at the bottom of this page.

Do Not Use Oil and Grease with Oxygen Equipment

CGA offers this poster as a free safety resource. It is important to note that this poster is not a substitute for reading and following codes and regulations, industry standards, and supplier instructions. Download your free Health Care Facility Oxygen Fire Safety poster today! 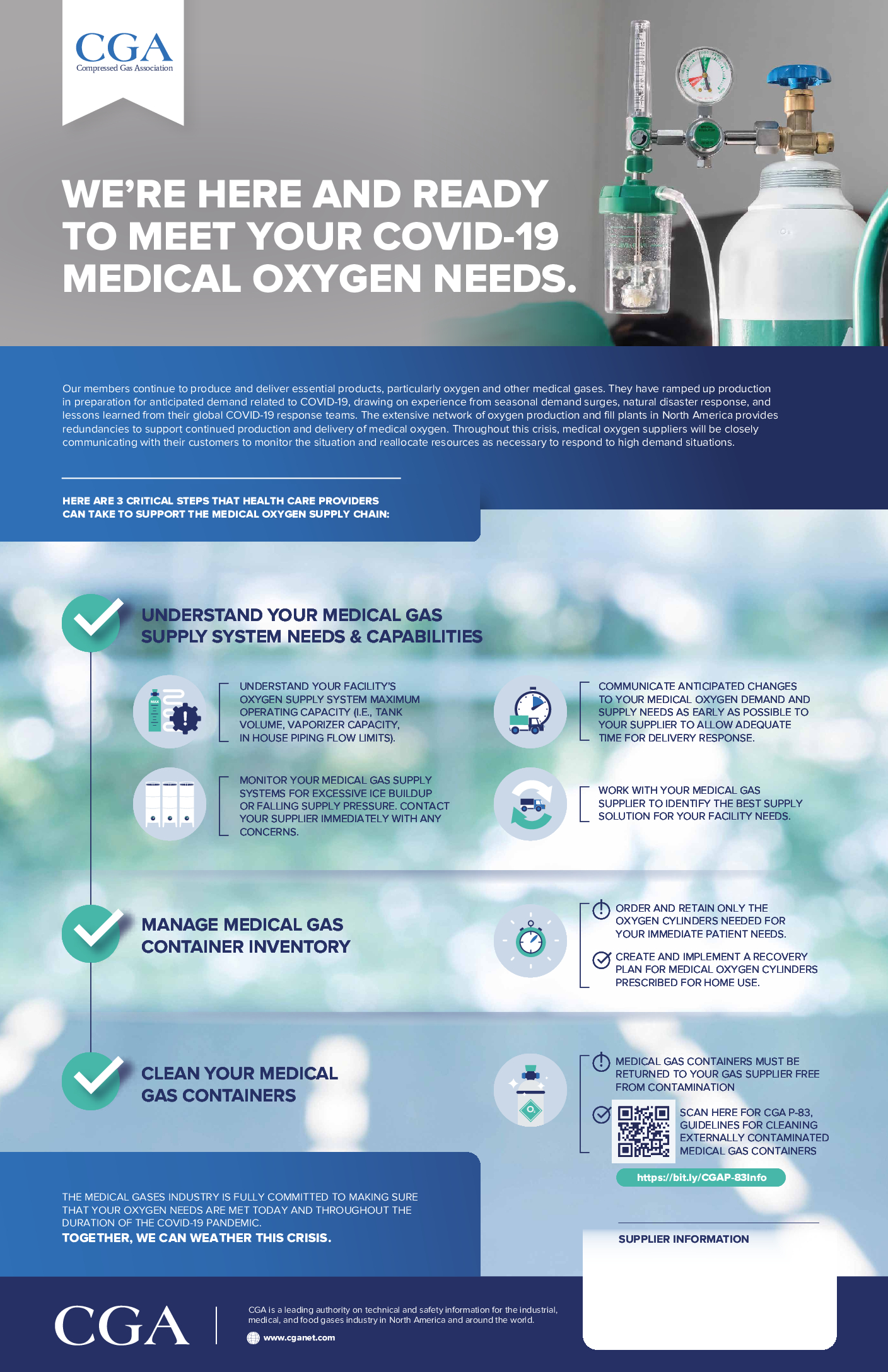 Members of the Compressed Gas Association stand ready to meet the medical oxygen needs of health care providers in the U.S. and Canada during the COVID-19 pandemic.

Our member companies continue to produce and deliver essential products, particularly oxygen and other medical gases, in response to demand related to COVID-19.

Throughout this crisis, medical oxygen suppliers need to closely communicate with health care facility customers in order to monitor the situation together and reallocate resources as necessary to respond to spikes in demand.

The posters are designed so that suppliers can add contact information to each poster, before sharing them with health care customers. Health care professionals are also welcome to download these posters for free.

Click the links below to download the two posters, each of which is available in either 8.5X11 inches or 11X17 inches.

We are providing safety publication CGA M-24 free of charge for all those who may need it, to help ensure that all health care facilities and their employees have access to the necessary information to facilitate a safe response to the COVID-19 pandemic.

The following additional CGA publications provide guidance on topics related to the industry’s response to the novel Coronavirus (COVID-19) pandemic.

Oxygen is a colorless, odorless, tasteless elemental gas that supports life and combustion constitutes about one-fifth of the atmosphere (20.95% by volume and 23.2% by weight). At temperatures below –297.3 °F (–147.4 °C) and atmospheric pressure, it is a transparent, pale blue liquid that is slightly heavier than water. All elements except the inert gases combine directly with oxygen to form oxides. Oxygen is nonflammable, but it readily supports combustion. All materials that are flammable in air burn much more vigorously in oxygen. Some combustibles, such as oil and grease, are easily ignited and burn with nearly explosive violence in oxygen.

All easily combustible materials, especially oils and greases, must be kept from contact with oxygen. Sources of ignition should be eliminated to the extent possible. Valves should be opened slowly in order to avoid the ignition of particles carried by oxygen flowing at high velocity.

In the case of an oxygen leak or liquid oxygen spill:

Avoid contact with liquid spills. If liquid oxygen is spilled over asphalt or other surfaces, do not walk on or roll equipment over the area for at least 1/2 hour after the frost has disappeared. A violent reaction may occur simply by impact or shock.

In case of frostbite from contact with liquid oxygen, place the frostbitten part in warm water, 100 °F to 105 °F (37.8 °C to 40.6 °C). If warm water is not available, wrap the affected part gently in blankets. Let the circulation re-establish itself naturally. Encourage the victim to exercise the affected part while it is being warmed. Consult a physician.

In general, pure oxygen is a local irritant to mucous membranes, and with extended continued exposure it can be destructive to lung tissue. Thus, when oxygen treatment is used to correct hypoxia (low-oxygen concentration in the arterial blood), it should be with the minimum concentration of oxygen that will overcome the hypoxia. It should be continued only as long as necessary.

One hundred percent oxygen inhaled at atmospheric pressure can cause pulmonary irritation and edema after 24 hours of exposure. The earliest symptoms are pleuritic substernal pain and dry cough, occurring after only 6 hours. Adult respiratory distress syndrome, which involves interstitial and intra-alveolar fluid extravasation in the lung tissue, follows after 24-48 hours. Other known toxic effects include retrolental fibroplasia, which has occurred in premature infants exposed to high concentrations of oxygen at birth, retinal circulatory injury, and erythrocyte hemolysis in adults.

Inhalation of high concentrations of oxygen for a few hours has not been found to produce harmful effects except for some special classes of patients.

Premature infants can suffer permanent visual impairment or blindness from inhalation of oxygen at high concentrations, and their oxygen therapy must be carefully controlled. Patients with chronic obstructive pulmonary disease retain carbon dioxide abnormally. If oxygen is administered to them, raising the oxygen concentration in the blood depresses their breathing and raises their retained carbon dioxide to a dangerous level.

The two systems of the body in adults most likely to be damaged by high concentrations of oxygen are the respiratory and central nervous system (CNS). Sea divers or tunnel makers are the working groups most commonly affected by high pressure oxygen environments.