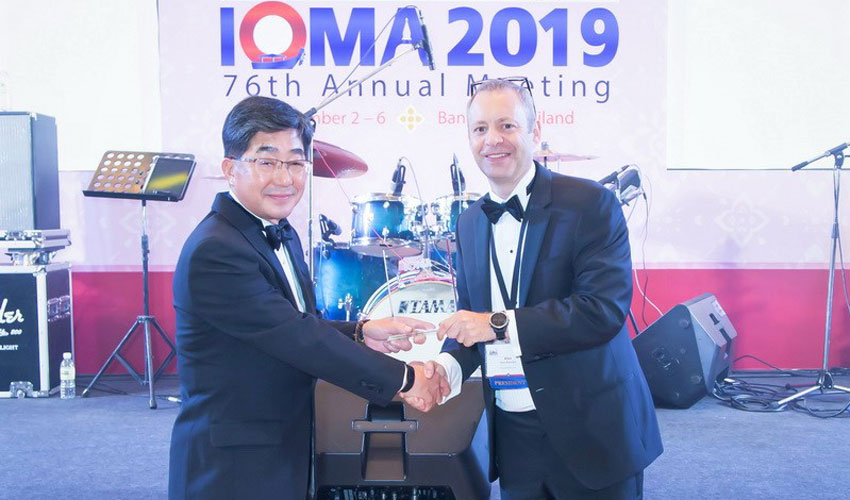 Congratulations to Satoshi Hasaka of JIMGA, Winner of the 2019 IOMA International Harmonization Award

CGA would like to congratulate Satoshi Hasaka of the Japan Industrial and Medical Gases Association (JIMGA) on being named the recipient of the 2019 IOMA International Harmonization Award. (Shown on the left in the picture above, receiving his award from Alex Buendia, President of IOMA).

This prestigious award was created in 2005 by the International Oxygen Manufacturers Association (IOMA) Global Committee to recognize significant and distinguished service to the international harmonization process, and is presented annually to an individual who best exemplifies the character, commitment, and technical excellence prevalent in the development of harmonized publications or legislation at the international level.

Mr. Hasaka joined Taiyo Nippon Sanso in 1984 and has been engaged in research and development efforts related to semiconductor gases throughout his career. He was assigned to work with Professor Ohmi, of University of Tohoku, who developed the famous ultra clean technology for semiconductor manufacturing processes. Working in Professor Ohmi’s laboratory in Miyagi, Mr. Hasaka spent his time on high purification, safe handling, supply systems, and abatement systems for electronic specialty gases.

As a JIMGA member, Mr. Hasaka was an active member of the Electronic Specialty Gases Committee and a significant contributor to the Association’s harmonization activities. He lead the development of harmonized arsine and phosphine codes of practice. In November 2016, he joined the JIMGA staff to improve the safe and efficient operation of our industry by supporting the development and acceptance of harmonized publications. In this capacity, Mr. Hasaka participates in the International Harmonization Council (IHC), ISO/TC 58 on Gas Cylinders, and ISO/TC 220 on Cryogenic Vessels as the Japanese representative.

In his acceptance remarks for the award, Mr. Hasaka demonstrated his continued dedication to the sustained safe operation of our industry, emphasizing the importance of a forward-thinking approach for the future. He noted the critical impact that advances such as artificial intelligence and the Internet of Things will have as technology continues to revolutionize the way we work, and that the industry must consider how to best incorporate these technologies in order to continue to thrive. He also spoke of the need for the industry to continue to focus on minimizing the impact of global warming.

Please join us in congratulating Mr. Hasaka for his well-deserved recognition as the IOMA International Harmonization Award winner!