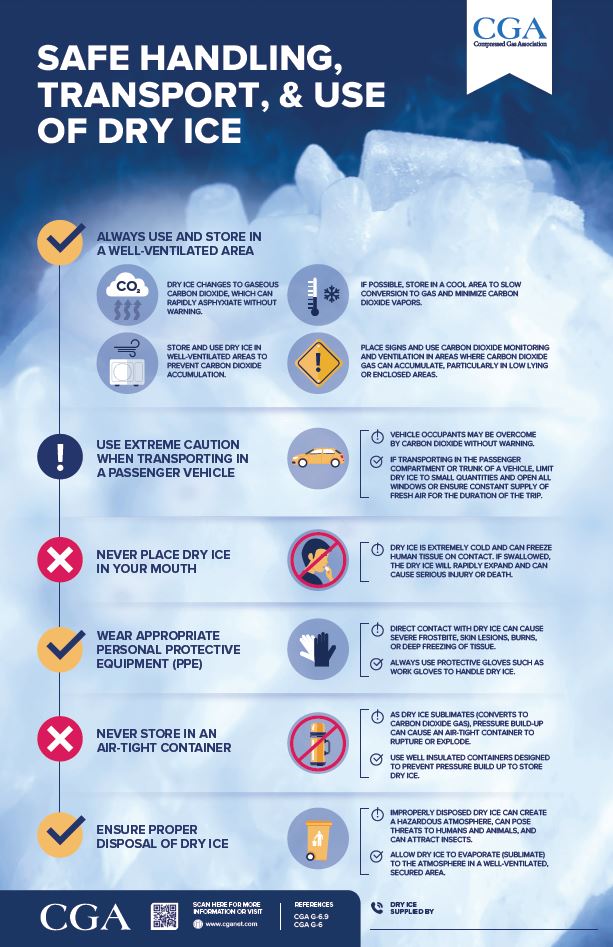 Dry ice is the solid form of carbon dioxide (CO2). Dry ice is extremely cold (−109.3 °F / −78.5 °C) and rapidly sublimates, or converts, into carbon dioxide gas at room temperature. It is used extensively as a cooling agent in a variety of applications such as food chilling and freezing, vaccine cooling, expendable refrigeration, blood and tissue sample preservation, heat treating of metals, and many more.

Anyone who handles dry ice should be aware of its unique properties and potential hazards. These include the extremely cold temperature, potential to create an oxygen-deficient atmosphere, and rapid conversion from a solid to gas.  It is critical that users read and follow the instructions and safety precautions provided by their dry ice supplier.

This safety poster, provided by the Compressed Gas Association, provides basic safety information for the handling, transport, and use of dry ice. To learn more, see the section, “Product Information: Carbon Dioxide” at the bottom of this page.

CGA offers dry ice posters as a free safety resource. It is important to note that these posters are not a substitute for reading and following codes and regulations, industry standards, and supplier instructions. Download your free safe handling, transport, and use of dry ice poster today!

Dry ice has a temperature of –109.3 °F (–78.5 °C) at 1 atmosphere and must be protected during storage with thermal insulation in order to minimize loss through sublimation. When entering low or confined areas where a high concentration of carbon dioxide gas may be present, use a self-contained breathing apparatus (SCBA) or supplied-air respirator. Do not use a cartridge-type respirator.

Dry ice should be stored in a cool, well-ventilated area in well-insulated storage containers designed to prevent pressure buildup. If transporting in the passenger compartment or trunk of a vehicle, limit dry ice to small quantities and open all windows or ensure constant supply of fresh air for the duration of the trip.

Care should be taken when handling dry ice. Use protective gloves such as work gloves or ice tongs; do not handle dry ice with bare hands. Blocks of dry ice can weigh in excess of 50 lb (22.7 kg) and can cause injury if dropped.

Dry ice is extremely cold and can freeze human tissue on contact. Never place dry ice in your mouth. If swallowed, the dry ice will rapidly expand and can cause serious injury or death.

The best method for disposal is to allow the dry ice to sublime or evaporate to the atmosphere in a well-ventilated area where no buildup of carbon dioxide vapor can occur. Such areas should be secured to ensure controlled access to authorized personnel only. Unused dry ice may be returned to the supplier for proper disposal.

Do not dispose of dry ice:

Inhalation. Persons who have inhaled large amounts of carbon dioxide and are exhibiting adverse effects such as rapid respiration and headaches should be removed to fresh air immediately, if safe to do so. Perform artificial respiration if breathing has stopped. Keep the victim warm and at rest and obtain medical attention at once. Fresh air and assisted breathing (if required) is appropriate for all cases of overexposure. Recovery is usually complete with no residual effects.

Skin contact. In case of frostbite from contact with dry ice or cold gases, place the frostbitten part in warm water, 100 °F to 105 °F (37.8 °C to 40.6 °C). If warm water is not available or is impractical to use, wrap the affected part gently in blankets. Do not rub. Consult a physician.

Eye contact. If the eyes are involved, obtain prompt medical attention. The only appropriate first aid measure is a soft sterile pad held in place over both eyes.

Carbon dioxide is normally present in the atmosphere at about 0.035% by volume. It is also a normal end-product of human and animal metabolism. The greatest physiological effect of carbon dioxide is to stimulate the respiratory center, thereby controlling the volume and rate of respiration. It is able to cause dilation and constriction of blood vessels and is a vital constituent of the acid-base mechanism that controls the pH of the blood.

Gaseous carbon dioxide is an asphyxiant. Concentrations of 10% or more can produce unconsciousness or death. Lower concentrations can cause headache, sweating, rapid breathing, increased heartbeat, shortness of breath, dizziness, mental depression, visual disturbances, and shaking. The seriousness of the latter manifestations are dependent upon the concentration of carbon dioxide and the length of time the individual is exposed.

The American Council of Governmental Industrial Hygienists (ACGIH) recommends a Threshold Limit Value–Time-Weighted Average (TLV®–TWA) of 5000 ppm (9000 mg/m3) for carbon dioxide. The TLV®–TWA is the Time-Weighted Average concentration for a normal 8-hour workday and a 40-hour workweek, to which nearly all workers may be repeatedly exposed, day after day, without adverse effect. Also, ACGIH recommends a Threshold Limit Value–Short Term Exposure Limit (TLV®–STEL) of 30 000 ppm (54 000 mg/m3) for carbon dioxide. The TLV®–STEL is the 15-minute TWA exposure that should not be exceeded at any time during a workday even if the 8-hour TWA is within the TLV®–TWA. Exposures above the TLV®–TWA up to the STEL should not be longer than 15 minutes and should not occur more than 4 times per day. There should be at least 60 minutes between successive exposures in this range.

OSHA lists an 8-hour Time-Weighted Average–Permissible Exposure Limit (TWA–PEL) of 5000 ppm (9000 mg/m3) for carbon dioxide. TWA–PEL is the exposure limit that shall not be exceeded by the 8-hour time-weighted average in any 8-hour work shift of a 40-hour workweek.