Safe Use of Carbon Dioxide in Cannabis Facilities, Food & Beverage Service, and Other Environments 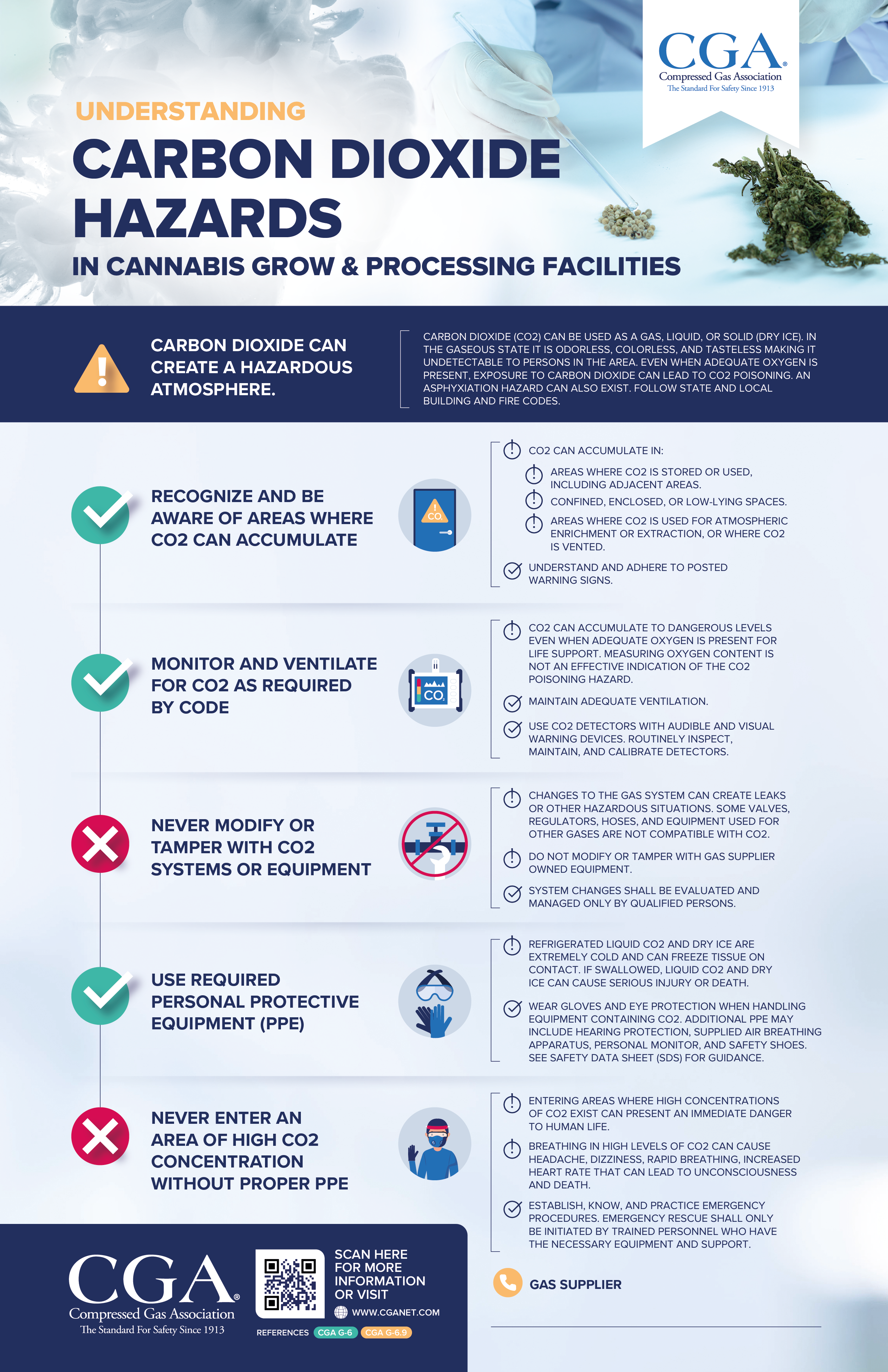 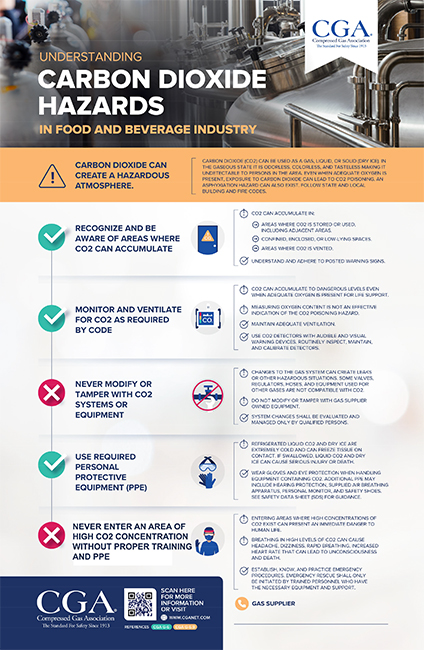 Dry ice is the solid form of carbon dioxide. It is used extensively as a cooling agent in a variety of applications such as food chilling and freezing, vaccine cooling, expendable refrigeration, blood and tissue sample preservation, metal heat treating processes, and many more. It is also sometimes used to create special effects such as fog for events or stage presentations. For more information about dry ice, see our online Dry Ice Safety Resource Center.

Anyone who handles carbon dioxide should be aware of its unique properties and potential hazards. Carbon dioxide is 1.5 times heavier than air and tends to accumulate in low or confined areas. It can displace oxygen and cause rapid suffocation as well as other serious physiological effects.

In addition, carbon dioxide can pose additional hazards such as exposure to extremely cold vapors or liquid or dry ice blockage of piping depending on its physical state.

The container label and safety data sheet (SDS) provide detailed hazard information and handling precautions. Always read and understand the label and the SDS before using any product and follow the instructions and safety precautions provided by your product supplier. These safety posters, provided by the Compressed Gas Association, provide basic safety information about the hazards associated with carbon dioxide. To learn more, see the section, “Product Information: Carbon Dioxide” at the bottom of this page.

CGA offers safety posters as educational resources to support the safe use of our industry’s products and equipment. It is important to note that these posters are not a substitute for reading and following codes and regulations, industry standards, and supplier instructions. Download your free carbon dioxide safety poster today!

Carbon dioxide does not support life and can be dangerous even when adequate oxygen is available.

Personnel handling carbon dioxide shall be thoroughly familiar with its associated hazards. There are several conditions in which extreme danger to personnel and equipment can exist, including:

It is critical that all personnel working with carbon dioxide understand the potential hazards and follow industry guidelines for safe practices. More information regarding these potential safety hazards and recommended mitigations are addressed in CGA G-6, Carbon Dioxide. Precautions for handling dry ice are found in CGA G-6.9, Dry Ice, and CGA SP-15, Safety Poster (End User), Safe Handling, Transport, and Use of Dry Ice.

Ventilate adjacent enclosed areas to prevent the formation of dangerous concentrations of carbon dioxide. Personnel including rescue workers should not enter areas in which the carbon dioxide content exceeds 3% by measurement unless wearing an SCBA or supplied-air respirators.

For supplemental environmental and regulatory information on carbon dioxide leaks and venting since carbon dioxide is a greenhouse gas, refer to CGA P-37, Good Environmental Management Practices for the Compressed Gas Industry, and CGA P-63, Disposal of Gases.

Do not attempt to remove anyone exposed to high concentrations of carbon dioxide without using proper rescue equipment or the potential rescuer could also become a casualty. Rescuers account for over 60% of confined space fatalities. If the exposed person is unconscious, obtain assistance and use established emergency procedures.

Inhalation. Persons who have inhaled large amounts of carbon dioxide and are exhibiting adverse effects such as rapid respiration and headaches should be removed to fresh air immediately, if safe to do so. Perform artificial respiration if breathing has stopped. Keep the victim warm and at rest and obtain medical attention at once. Fresh air and assisted breathing (if required) is appropriate for all cases of overexposure. Recovery is usually complete with no residual effects.

Skin contact. In case of frostbite from contact with dry ice or cold gases, place the frostbitten part in warm water, 100 °F to 105 °F (37.8 °C to 40.6 °C). If warm water is not available or is impractical to use, wrap the affected part gently in blankets. Do not rub. Consult a physician.

Eye contact. If the eyes are involved, obtain prompt medical attention. The only appropriate first aid measure is a soft sterile pad held in place over both eyes.

Carbon dioxide is normally present in the atmosphere at about 0.035% by volume. It is also a normal end-product of human and animal metabolism. The greatest physiological effect of carbon dioxide is to stimulate the respiratory center, thereby controlling the volume and rate of respiration. It is able to cause dilation and constriction of blood vessels and is a vital constituent of the acid-base mechanism that controls the pH of the blood.

Gaseous carbon dioxide is an asphyxiant. Concentrations of 10% or more can produce unconsciousness or death. Lower concentrations can cause headache, sweating, rapid breathing, increased heartbeat, shortness of breath, dizziness, mental depression, visual disturbances, and shaking. The seriousness of the latter manifestations are dependent upon the concentration of carbon dioxide and the length of time the individual is exposed.

Physical Constants
Scroll to top
We use cookies on our website to give you the most relevant experience by remembering your preferences and repeat visits. By clicking “Accept”, you consent to the use of ALL the cookies.
Do not sell my personal information.
Cookie SettingsAccept
Manage consent